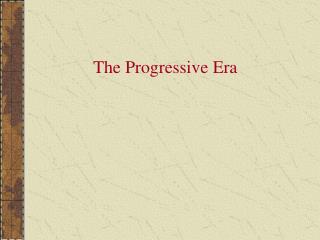 The Progressive Era. 1. How did progressivism and organized interest groups reflect the new political choices of Americans? 2. Why did progressives believe in the ability of individuals to affect positive change? How has this idea manifested itself in political reform efforts?

The Simple Present Tense in Contrast to the Present Progressive (Continuous) Tense - . by patricia galien

Grammar - . progressivecontinuous. to be in the middle of doing an action. progressive. (person) be (verb)+ing. clap.

The Progressive Movement - . “the muckrakers are often indispensable to society but only if they know when to stop

US History MP2 - . day 1 bellringer. rewrite the following in your own words: evaluate the impact of progressive era

Integrated Business Planning - . how to best meet your mission. presented to the association for progressive