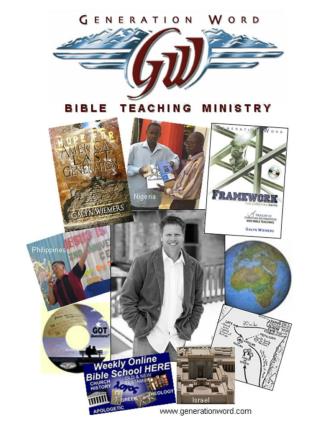 GENERATION WORD Identification Generation Word is a local Bible teaching ministry that is internationally communicating the Word of God through books, cds and the internet. Purpose

Word Generation - . a process for learning academic language. goals. to learn the importance of explicitly teaching

Word Generation Scope and Sequence - . erin ruegg. each grade level has a unique set of units. 4 th and 5 th grade have

The Word of God for our Generation - . preservation of the biblical text. introduction. 1. the infallible inspiration of

Word, word, what is the word? - . teaching vocab. in the foreign lang. classroom. vocab. what does it mean to know a

Generation to Generation - Chromosomes : tiny structures with in the nuclei of cells that carry information about

Generation to Generation - Chromosomes: tiny structures with in the nuclei of cells that carry information about

Word Within the Word - . list 50 words 1-8. subliminal. below consciousness. he has a subliminal fear of darkness.

Word within the Word - Germicide. i use germicide to clean my house because the germs are so alive.. germ = vital or

Word Within the Word