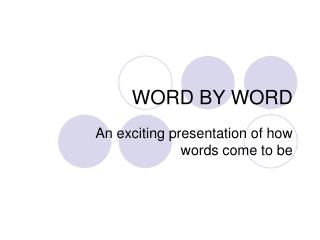 WORD BY WORD. An exciting presentation of how words come to be. Dates/Events important to OE(449-1100). 55BC-410AD: Romans occupy what would become Great Britain

Word, word, what is the word? - . teaching vocab. in the foreign lang. classroom. vocab. what does it mean to know a

Word Within the Word - . list 50 words 1-8. subliminal. below consciousness. he has a subliminal fear of darkness.

Word within the Word - Germicide. i use germicide to clean my house because the germs are so alive.. germ = vital or

Word Within the Word

Word Within a Word - . unit 7b. derm (skin). dermatitis: inflammation of the skin a pachyderm rarely suffers from

Word within a word - . vocabulary 8b. demi (half). demigod: half human, half god perseus and hercules were both

Word Structure and Word Formation (Word Building) - . word formation is the branch of lexicology that studies the

Word Within a Word - . unit 9b. co (together). colloquy (n.): dialogue; conference the graduate student attended a