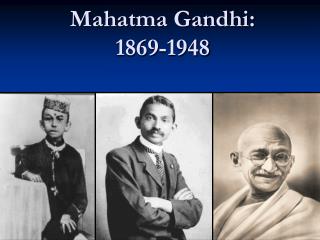 Mahatma Gandhi: 1869-1948 Consider: Strength does not come from physical capacity. It comes from an indomitable will. The weak can never forgive. Forgiveness is the attribute of the strong. Whatever you do will be insignificant, but it is very important that you do it. Consider:

Life and Times of Mohandas Gandhi - . pictures are worth a thousand words. even though you have a limited knowledge of

Mohandas K. Gandhi - . at the age of 13, gandhi was married through his parents' arrangements to kasturba makhanji. at

Mahatma Gandhi - . by astuti mohandas karamchand gandhi was the preeminent leader of indian nationalism in british-ruled

Mahatma Gandhi - . “   you must be the change you wish to see in the world . ”. biography. mohandas karamchand