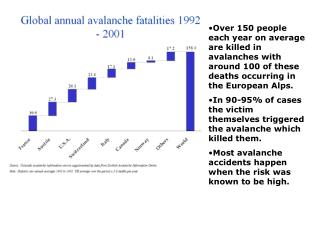 Over 150 people each year on average are killed in avalanches with around 100 of these deaths occurring in the European Alps. In 90-95% of cases the victim themselves triggered the avalanche which killed them. Most avalanche accidents happen when the risk was known to be high.

The Legislative Process in Alaska - . courtesy of the juneau legislative information office. the alaska legislature. the

Vacation Specials - . ocean vista cruise lines. eight-day, seven-night cruise of the alaska inside passage may 6 through

Alaska - . by: kayla windsor. the location. southwest. the abbreviation. ak. the nickname. the last frontier. the

Special things that Represent Me - . by: jamie beebe-parker. my childhood. this is a picture of my dad and i after i was