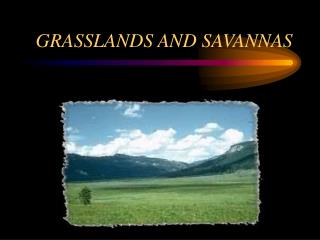 GRASSLANDS AND SAVANNAS. Locations of Grasslands . Grasslands are located in the middle latitudes, in areas with too much rain for deserts and too little for forests (yellow to the right).

MANAGING AND SUSTAINING GRASSLANDS - . december 19, 2011. what are grasslands?. grassland biomes are… dominant

Savanna - . regions of africa. savanna. a savanna is a rolling grassland scattered with shrubs and isolated trees not

The Grasslands - . by ben moore, cj purse, ryland valley, lauren church. what is a grassland?. have an average of 10-40

Grasslands - . by mira mooreville and dana gitlin. what is a grassland?. regions with enough average annual precipitation

Grasslands: Prairies and Savannas - . by: julie seong &amp; magda martynko. grasslands around the world. locations of

Savannas - . plains full of grasses and scattered trees and shrubs. dry climate, such as east africa and western india.

Savannas - . by: erica harden. unique facts. a savanna is a rolling grassland scattered with shrubs and isolated trees,

Temperate Grasslands - . angela and heaven. table of contents. intro to temperate grasslands. antarctica is the only

Savannas - . abdulla al-attiyah. savannas are located in australia, india, south america and mostly africa. this is how

7-2 How Does Climate Affect the Nature and Locations of Biomes? - . concept 7-2 differences in average annual