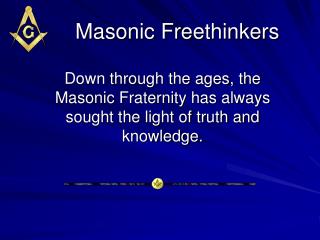 Masonic Freethinkers Down through the ages, the Masonic Fraternity has always sought the light of truth and knowledge. Masonic Contributions to Art, Music, Medicine and Science

Fayetteville Freethinkers March 2011 - . problems with. easter. by doug krueger. back from the dead !?. according to the

Process Thought: A Very Basic Introduction - . by fr. charles allen, ph.d. for a more detailed discussion of this topic,