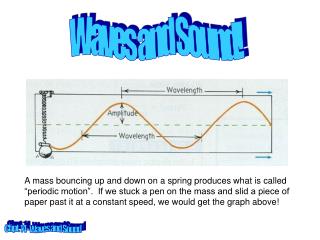 Waves and Sound! A mass bouncing up and down on a spring produces what is called “periodic motion”. If we stuck a pen on the mass and slid a piece of paper past it at a constant speed, we would get the graph above!

SOUND - . what we’ve got so far. sound travels in waves sound is a form of energy sound needs a medium sound is created

Sound waves ! - . the nature of waves. a wave is a repeating disturbance or movement that transfers energy through matter

Waves and Sound - . the world is full of waves. some waves like those in water are obvious. others, like sound and light

Sound waves are longitudinal waves—compressions and rarefactions that travel through a medium. - You can identify

Sound - . sound is created by vibrations. as sound moves through air it vibrates the air particles. this is a

Sound Waves - . how sound travels and how we hear it!. properties of sound. sound waves are longitudinal waves when a