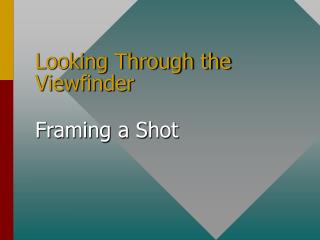 Looking Through the Viewfinder

Looking Through the Viewfinder. Framing a Shot. The Task:. Select most Significant Details Show them in most effective way. Key Concept 1. Select those event details and tell the real story with clarity and impact. Overview. THE BASICS OF FRAMING A SHOT

Looking Through the Viewfinder

Composition - . the arrangement and relationship of the different parts that make up the whole image. photographic

Rule of Thirds - . quick tutorial. what is the rule of thirds?. it is a way of dividing the photo into equal parts to

Chapter 2 - . the camera. capturing a great photo, in camera, is the skill. printing a perfect photograph is the art. “

The Parallax of ICD Therapy 2012 - . john mandrola. parallax…. …the effect whereby the position or direction of an