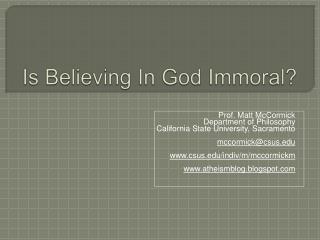 Is Believing In God Immoral?

Is Believing In God Immoral?. Prof. Matt McCormick Department of Philosophy California State University, Sacramento mccormick@csus.edu www.csus.edu/indiv/m/mccormickm www.atheismblog.blogspot.com. You Can’t Be Moral Without God !?!? Can You?.

Is Believing In God Immoral?

THE GREAT CONTROVERSY ATHEISM VS. RELIGON. ARE RELIGION &amp; SCIENCE IN CONFLICT? - . in opposition or in

When Good Things Happen to Bad People - . why are the wicked getting rich while i struggle? a study of psalm 73.

Dancing &amp; The Bible - . i. the bible teaches the good side &amp; bad side of dancing. “social dancing, as

Atheism and Agnosticism - . by: felicia, jordy , valeska , vincent. introduction. agnosticism: ‘a’ means without, ‘

Reincarnation - . the what, the why &amp; our response. dr. rick griffith singapore bible college

Does God exist and why does it matter? - . neil shenvi duke intervarsity 7/13/12. talk outline. which god? does god

Argument - . requires premises and conclusion non-arguments : i don’t like chocolates ; chocolates are makes you sick; Virtue - . virtue- is a good habit that helps us to act according to god’s love for us. vice- is a bad habit. two types

Review of the Introduction to The Epistle of James - . author: god writer: james (brother of jesus) time period: ~45-50