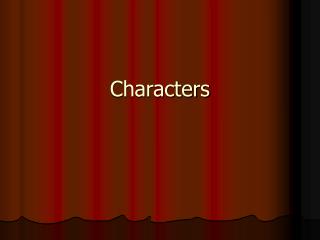 CHARACTERS - . edward henry machin ( denry ): he is main characters .his mom called to denry him .he was lazzy and not

Characters - . 8 th grade mrs. cline – mrs. coverdale. character. a character is a person or an animal that takes part

Characters - . farmer jones a drunk and a poor farmer, his cruelty towards the farm animals inspires their rebellion. mr.

Characters - . review for chapter two test. a character’s traits. include all of these: appearance, words, actions,

Characters - . what makes a good main character. your favorites. lets take a look at some of your characters and see

Characters - 1. the game is 3erd person and the goal is to beat the game or just free roam. there is many different skate

Characters - . conside r this scenario:. a new student has moved to town and is attending your school. your friend thinks