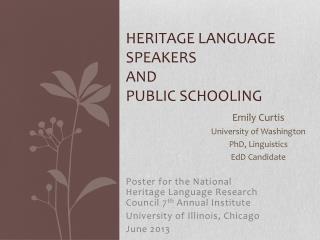 05-01 Which of the following will encompass the largest number of speakers? Language family Language branch Indiv - Idual

Pidgins and Creoles - . pidgins and creoles. a pidgin is a contact language that developed in a situation where speakers

All audio is streamed through your computer speakers. - A brave new world for u.s. taxpayers with foreign assets: the new

Education in Great Britain - . made by pupil of the 11 form bukanova svetlana. schooling in the united kingdom. higher

Evolution of Language - . language and communication week 7 mike dowman. how does language change over time?. produce.