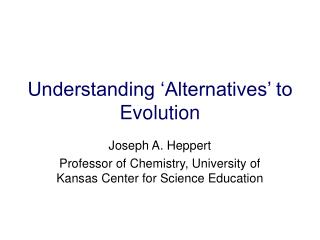 Understanding ‘Alternatives’ to Evolution. Joseph A. Heppert Professor of Chemistry, University of Kansas Center for Science Education. Goal of This Presentation. ME 443 - . comparison of alternatives prof. dr. mustafa gökler. introduction. a systematic approach that can be used in

Evolution - . origin of life and speciation. explain how the giraffe could have evolved :. what is natural selection?.

Darwin and Evolution - Chapter 17 history of evolutionary thought prior to darwin, most people had a mindset determined