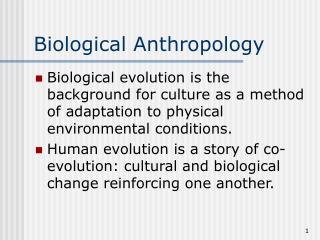 Biological Anthropology. Biological evolution is the background for culture as a method of adaptation to physical environmental conditions. Human evolution is a story of co-evolution: cultural and biological change reinforcing one another. Basic Hominid Adaptations. Bipedalism Chapter 9 - . biological foundations of personality. questions to be addressed in this chapter. are infants born with

The Future of Gerontology in a public culture reshaped by Biological Reductionism - Andrea g. drusini university of

Finding What you Need in Biological Databases - . cédric notredame. databases:. where is my needle ?. our scope. give

SAMPLING FOR CONTAMINANTS - . of biological origin. presented by. mold in the news!. biological contaminants. defining