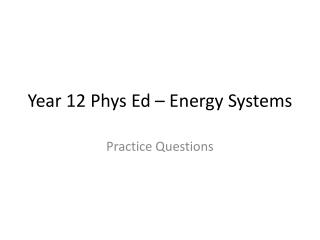 Year 12 Phys Ed – Energy Systems. Practice Questions. Multi Choice – Question 1. Select the most likely cause of fatigue in performance as many push ups as possible in 10 seconds? Local muscle glycogen depletion H+ accumulation PC depletion None of the above. Question Two.

ENERGY RESOURCES - . where does our energy come from?. can energy be “made”?. the 1 st law of thermodynamics says

energy - . the ability to do work. energy cannot be created or destroyed, but it can be changed. potential energy. stored

Chapter 3 Science, systems, Matter, and Energy - . easter island what happened?. what important lesson lesson can we