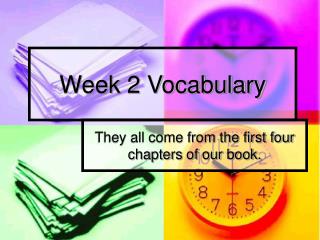 Week 2 Vocabulary. They all come from the first four chapters of our book. Assuaged. To pacify or soothe Example: The mother assuaged the baby with a bottle. Predilection. A tendency to think favorably of something in particular. Example: Smiley has a predilection for raw hide bones.

Unit 2, Week 2 My Diary from Here to There - . 4 th grade. vocabulary. overheard - heard something when you were not

2 ND WEEK VOCABULARY - . get out your binder for klee open to vocab be ready to learn!!. agile. function: adjective

Vocabulary - . blockade. get out a piece of loose-leaf paper and fold into four boxes copy down this week’s vocabulary