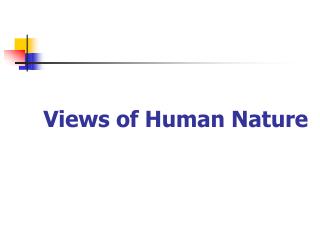 Human Nature - . intro…. what are humans like… what do they have in common….do they have enough in common to say

Views of Planning Human Resources - . planning for human resources has had a chequered past planning is a critical tool

CHINESE VIEWS OF NATURE AND ART - . i. nature ii. the consciousness of the sage or artist iii. the creative process.

The Nature of Human Relations - . what motivates employees to perform on the job is the focus of human relations, the

Aristotle’s theory of human nature - . everything can be explained by it’s telos – or purpose. what distinguishes

The Science of Human Nature - . molyneux’s

The Nature Of Human Beings - . by: nick vlodek. what is a hero?. by definition, a hero is a man who is admired for his

Predatory nature of human existence - Nearly all characters admit they feel lonely and isolated. each wants a friend, but

HUMAN VS. NATURE - . in the news: tragedy at niagara falls. article http://www.thestar.com/printarticle/1039520 video