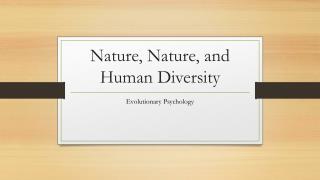 Nature, Nature, and Human Diversity. Evolutionary Psychology . Genes “Our Codes For Life”. Each person contains 46 chromosomes – 23 by your mother, 23 by your father Chromosome: threadlike structures made of DNA molecules that contain the genes Nature, Nurture, and Human Diversity - . chapter 3. behavior genetics. so how do we separate out gene and environmental

Nature vs Nurture and Human Diversity - . chapter 4. how can heritability and the effects of environment be studied?.

Chapter 3: Nature, Nurture, and Human Diversity - . you’re one of a kind. ‘had to be there. evolve. designer genes.

Human Nature - . intro…. what are humans like… what do they have in common….do they have enough in common to say

Human Nature and Economics - . good and bad. write a list of 5 behaviors characteristic of a good person write list of