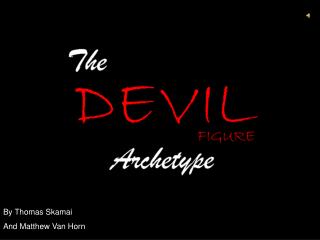 By Thomas Skamai And Matthew Van Horn. The Devil Figure…. is usually a villain. has always appeared in works of literature, and still does today. is a character that often reveals how society perceives the origin of evil. Who is the Devil?. the enemy of God.

Matthew 27:27-51 - . 27 then the soldiers of the governor took jesus into the praetorium and gathered the whole garrison

Horn Form - . a sentence is in horn form if and only if …. it is a conjunction of atomic sentences on the left side,

Matthew Chapter 11 - . matthew 11:1. and it came to pass, when jesus had made an end of commanding his twelve disciples,

Horn clauses - . intro. a horn clause is a disjunction of literals of which at most one is positive . e.g. {lawyer(x),