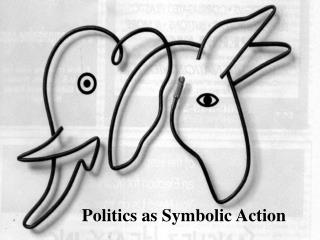 Politics as Symbolic Action. Politics functions , in part, by controlling the symbolic containers, providing MEANING to events. Symbolic interaction is the Reality in Which we Act. What is Democracy. What is Government?. What is Freedom?. What is Nation Building?. Point of View.

Politics as Institution - . the distribution of power in society. key terms. politics – system of distributing power

Politics as a Vocation - . (lecture based on different translation, but page numbers refer to class text) based on

Demography as if Politics Matters (&amp; Politics as if Demography Matters) - . michael s. teitelbaum labor and

LANGUAGE AS A SYMBOLIC SYSTEM FOR COMMUNICATION

TENSIONS OF STEREOTYPES AS POLITICS - . jasdev singh rai. being smart. a new history of stereotyping (unknown binding) by