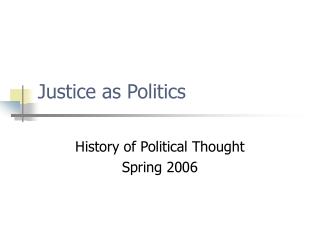 Justice as Politics History of Political Thought Spring 2006 Central Claim Reaching agreement on basic principles of justice is a political rather than a philosophical act.

PURITAN JUSTICE - . types of punishment. puritan punishments were designed to be humiliating above all other emotional or