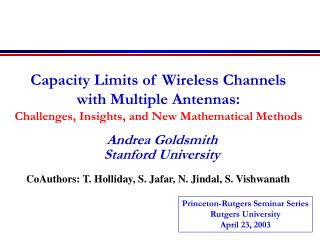 Andrea A. Lunsford Stanford University - The changing (and yet) enduring nature of rhetoric and writing: findings from

Jessica Goldsmith - . composer. bach (1685-1750). 40 musicians from his family are remembered bach was the most gifted

Oliver Goldsmith - . by liam webber. life. although his exact date of birth is unknown it is thought to have been on, or

Stanford University Tom Andriacchi - . forum on innovation and entrepreneurship in biomedical engineering education. b i