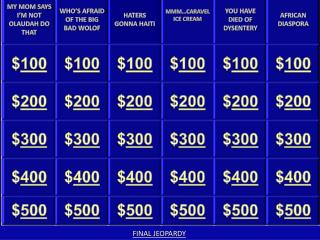 FINAL JEOPARDY. 100 Points Question: These people were the first wave of Africans brought to Spain and Portugal They learned European languages and worked. Alternately they were sent by their parents to learn more about European culture. Answer: Atlantic Creoles. 200 Points Final Jeopardy - . 100. the battle of trenton took place in which state?. new jersey. 200. which tactic did the colonist