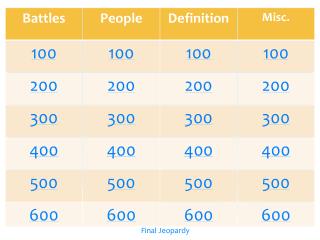 Final Jeopardy. 100. The Battle of Trenton took place in which state?. New Jersey. 200. Which tactic did the Colonist use that broke the rules of 18 th century warfare?. They targeted British commanders. 300. What was General Burgoyne’s goal at the Battle of Saratoga?.