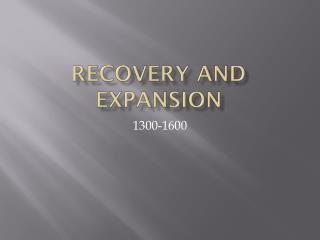 The Business Cycle - . a brief background of what it is, why it occurs, and why it is every president’s worst

ECONOMIC EXPANSION AND SOCIAL CHANGE - . 18th century -&gt;economic recovery from the decline in the 17 th century

Business Cycle - . in this lesson, students will be able to identify characteristics of the business cycle. students will

Business Cycle - . section 6.2. turn in review facts 6.1. quiz. define opportunity cost and give an example. the u.s. is

European Expansion and Religious Wars - . references: a history of the modern world by palmer and colton a history of