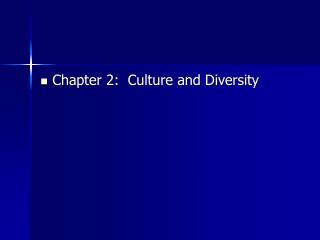 Culture and Diversity - . 2.1 and 2.2. culture consists of all the shared products of human groups, both physical and

Introduction to Culture and Diversity - Objectives. what is the difference between the melting pot' and

Diversity and Culture - . the unit designs, implements, and evaluates curriculum and experiences for candidates to

Culture Care and Diversity - . a nursing theory by rabia chaudhry. dr. leininger was the first professional nurse with a

Chapter 2: Culture - Objectives: define and identify some cultural universals and discuss how carrying out universal

CHAPTER 2 -- CULTURE - . warm-up. taking someone’s life is violation of a social norm. is there ever a situation where