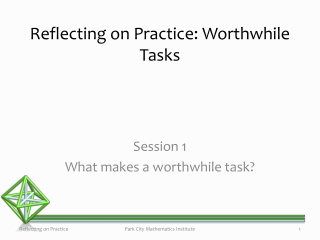 Reflecting on Practice: Worthwhile Tasks. Session 1 What makes a worthwhile task?. What do you (as students) predict will happen to the area if you “ slant ” the quadrilateral? Why?. Bringing it all together. A sixth grade class studying area of polygons in the fall