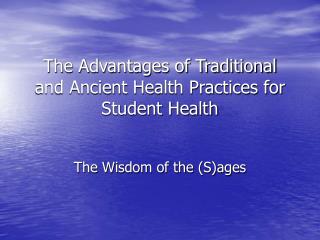 The Advantages of Traditional and Ancient Health Practices for Student Health

The Advantages of Traditional and Ancient Health Practices for Student Health

Introduction to Health Promotion and Population Health - . presentation by irving rootman to sfu class on principles and