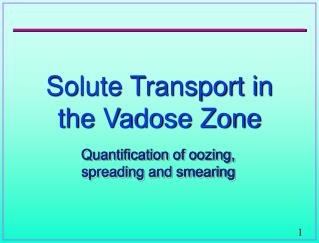 Solute Transport in the Vadose Zone

Solute Transport in the Vadose Zone. Quantification of oozing, spreading and smearing. Overview. Much of the attention in vadose zone and groundwater in general results from interest in contaminant transport. We will review basic formulations of sorption and degradation

Solute Transport in the Vadose Zone

Chapter 15 - . solutions. 15.1 what are solutions?. a. characteristics of solutions 1. solutions are homogeneous mixtures

“ The Red Zone ” Chapter Management Portal - . national technology taskforce. how to access the red zone. how to

Chapter 12 Solutions - . a solution is composed of two parts: the solute and the solvent. solute the gas (or solid) in a

Do Now - . take out your notes packet identify the solute, solvent and solution for hot chocolate. solution: what is a

Membranes and Transport - Lehninger Chapter 11 - . 11.1 the composition and architecture of membranes 11.2 membrane

Molality and Mole Fraction - . in chapter 3 we introduced two important concentration units. % by mass of solute.