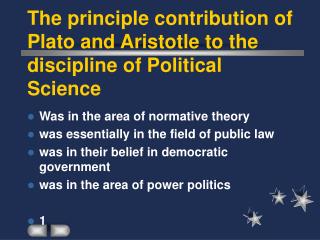 The principle contribution of Plato and Aristotle to the discipline of Political Science. Was in the area of normative theory was essentially in the field of public law was in their belief in democratic government was in the area of power politics 1. According to Aristotle.

Political Science 30: Political Inquiry - . how sure is sure? quantifying uncertainty in tables. using two-way tables sat

Plato &amp; Aristotle From Raphael’s School of Athens - . hellenic period 479-323 bce. the battle of plataea to the

Aristotle’s Poetics - . plato loved poetry but felt that because of socrates teachings, that poets were imitators

Aristotle – Empiricist/Materialist Plato’s student, but disagreed with him on many points.  - - as much a

The Allegory of the Cave from Plato’s Republic (380 BC) - . what is an allegory?. an extended metaphor the underlying

Harmony School of Political Science and Communication Presents: - . the 2012 international fest. goal: . to educate all

Political Science Power and Politics - . power and politics. politics: is that process in any society, usually working