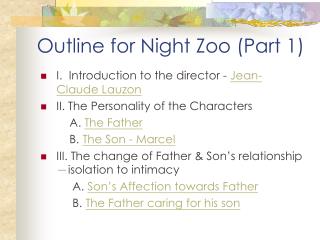 Outline for Night Zoo (Part 1). I. Introduction to the director - Jean- Claude Lauzon II. The Personality of the Characters A. The Father B. The Son - Marcel III. The change of Father & Son’s relationship － isolation to intimacy A. Son’s Affection towards Father