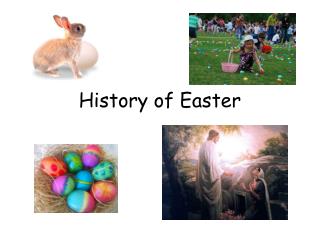 History of Easter. Acts 12: 4 And when he had apprehended him, he put him in prison, and delivered him to four quaternions of soldiers to keep him; intending after Easter to bring him forth to the people. . History of Easter Eggs No Easter without eggs History Of Easter - . pascha. “and when he had apprehended him, he put him in prison, and delivered him to four

History of Easter - . janna &amp; maša. with easter the dutch people remember that jesus raised from the dead, after

History Of The Easter Celebration - . current practice of many religion an annual holiday millions celebrate today

Symbols of Easter - . kristinka saćer 8.b. symbols of easter is:. rabbit rabbits remind us od spring and new life . they

Symbols of Easter - . why do we use these symbols?. rabbit or hare. egg. chick. lamb. daffodils. or other spring

Symbols of Easter - Why do we use these symbols? rabbit or hare egg chick lamb daffodils or other spring flowers! a

Easter and History: the Daniel 9 Factor - . yaweh : the god over history. “where is god?” god doesn’t micro-manage

Easter - . he is risen. truth, judgment and eternity. ac. 2:22 “men of israel, listen to this: jesus of nazareth was a

Easter ! - . • we celebrate easter in spring in march or in april. • easter is an important religious festival. •

Easter - . easter is celebrated with fervor in  catholic croatia  especially in  dalmatia.  in some ways it is

Easter - . the death and barrel of jesus christ mark 8:31 and he began to teach them that the son of man must suffer many

Easter - By 4kp wcps why do we celebrate easter? we remember that jesus died on the cross. on easter sunday, we remember

EASTER - . did the apostles hunt for easter eggs? what do bunnies and eggs have to do with the death of jesus? has easter