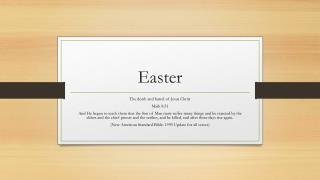 Easter. The death and barrel of Jesus Christ Mark 8:31 And He began to teach them that the Son of Man must suffer many things and be rejected by the elders and the chief priests and the scribes, and be killed, and after three days rise again .

Celebrating Easter - Christians around the world celebrate the easter

EASTER IN BRITAIN &amp; USA - . easter – what comes to mind?. do you know that…. easter is a religious holiday

Similarities and difference between Easter and Holi

EASTER - . palm sunday. on palm sunday jesus went to jerusalem on a donkey, not a posh horse, a donkey. they kept saying

EASTER TRADITIONS - . by ioniceanu alexandra. easter traditions in romania. easter is the most important celebration of

Easter - . is the most important time in the church’s liturgical year. the easter vigil. is celebrated on the saturday

Easter traditions in the Czech Republic - . easter is the beginning of the spring and it is also a c hristian feast .

Easter in Czech - . what is the feast of easter ?. easter in czech republic easter is a religious holiday. it celebrates

Between Easter and Pentecost - Waiting anxious out of control going with the flow. resigned excited fearful distracted.

Ostern In Deutschland Easter in Germany - . by tiffany sultana 2.7.

Holy Week - Christians celebrate the week leading up to easter