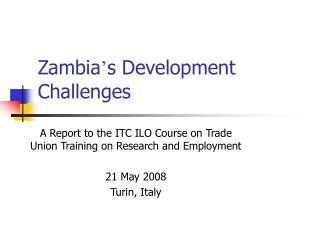 Bank of Zambia - . key developemnts in the financial sector and oulook for the medium term presented at the the 43 rd

Zambia ’ s Development Challenges - . a report to the itc ilo course on trade union training on research and employment

My Zambia country - By r ashod foster, donovan randall . my zambia country. z ambia has one of the lowest population to

Working with Diaspora organisations and individuals The role of Scotland-Zambia Association - . eunice sinyemu chair of ZAMBIA’S PLACE IN AFRICA - . located south of the equator, this landlocked country is positioned in southern africa,