The home is under attack and that ’ s is not a secret! - PowerPoint PPT Presentation 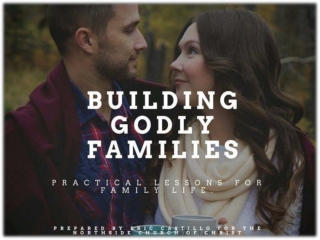 The home is under attack and that ’ s is not a secret!

The home is under attack and that ’ s is not a secret!. God’s will. Satan’s will. The Family & the Home. Lesson 1B: The Home in the Beginning. The Home in “The Beginning” (review). The home in “the beginning” was a…

The home is under attack and that ’ s is not a secret!

Hezekiah’s Passover 2 Chronicles 29-30 - . can this passage be applied to the teaching of baptism today?. background.

Postmillennialism - . dr. rick griffith • singapore bible college • biblestudydownloads.com. is there a future for

The Restoration of the Tabernacle of David - . online resources. www.threemacs.org. important kingdom principles: the

What is Israel? A Search for Meaning in Biblical Times and Today - . three phases or periods of time. israel (“god

WHAT IS ESCHATOLOGY? - . “ eschatos ” in greek means the end . eschatology therefore refers to the doctrine or study

Dispensational Truth- God's Plan of the Ages - . the consequences of the old covenant. disobedience would have

Israel—Things to Keep in Mind - . today’s israel is not the ot israel they have missed the messiah their leaders are

Leviticus 1-10 - . the book of leviticus represents the priestly religious life of israel. it’s dominant thought is

Christology 9 The Future Ministry of Christ - . series: critical doctrine the rapture of the church. christology. the

Pre – millennial - ism - . will there be an earthly kingdom?. one --- resurrection. john