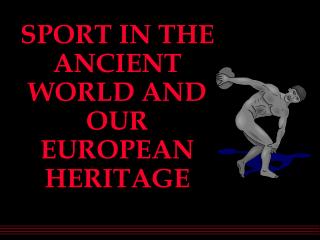 SPORT IN THE ANCIENT WORLD AND OUR EUROPEAN HERITAGE

SPORT IN THE ANCIENT WORLD AND OUR EUROPEAN HERITAGE

SPORT IN THE ANCIENT WORLD AND OUR EUROPEAN HERITAGE - . early cultures. egypt warriors trained dancing was valued in

World War I Propaganda Posters… - . the most famous posters are those that depicted germans as monsters and abusers of

Yoga and Meditation - . unify your mind, body, a nd spirit. relax and restore. calm the mind and boost oxygen levels in

Meditation - . tony &amp; sylvester. what is it?. meditation refers to any form of practices in which individuals

The Geography of Italy - . eq: defend the statement-- &quot;rome was in a good place and rome was a good

THE MARVELLOUS SOUTH INDIA If Egypt is described by the historians as the “cradle of civilisation”, and, - Greece,