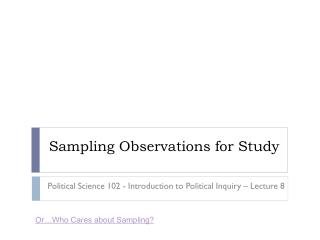 Sampling Observations for Study Political Science 102 - Introduction to Political Inquiry – Lecture 8 Or…Who Cares about Sampling? Populations versus Samples A population is any well-defined set of units of analysis. The set of cases that we want to understand

POPULATIONS AND SAMPLING - . let’s look at our example research question. population. who do you want these study

Sampling Methods and the Central Limit Theorem - . chapter 8. goals. explain why a sample is the only feasible way to