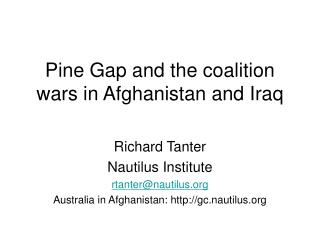 Pine Gap and the coalition wars in Afghanistan and Iraq

Pine Gap and the coalition wars in Afghanistan and Iraq

The Navy at War in Afghanistan: Operation Enduring Freedom 2000-2003 - . learning objectives. ●the student will

Conflicts in the Middle East and Afghanistan - . an introduction to the arab-israeli conflict and intervention of the

Kurdistan The Gateway to Iraq - . kurdistan regional government – iraq board of investment. apr. 2012. summary of

Invasion of Afghanistan - . ss7h2d – the student will analyze continuity and change in southwest asia (middle east)

Iran, Iraq, &amp; Afghanistan: Can’t We All Just Get Along? - . iraq: early history. modern day iraq is the ancient

US Invasion of Afghanistan - . by: jackson wright. factors leading up to the invasion. during the clinton administration

The next slide refers to Choices Document #2: The US in Afghanistan - . be prepared to list some current challenges to

The Iraq War - . u.s. enters iraq in search of weapons of mass destruction. however, both israel and north korea are

The Northern Wars - . the northern war. this image is of hone heke chopping down the british flag on maiki hill above