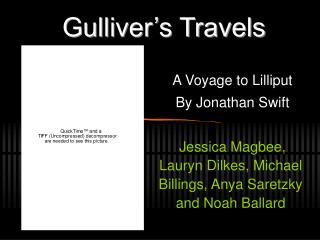 Gulliver’s Travels. A Voyage to Lilliput By Jonathan Swift Jessica Magbee, Lauryn Dilkes, Michael Billings, Anya Saretzky and Noah Ballard. Chapter One. Tells of Gulliver’s childhood and young adulthood Takes a voyage on the Antelope , is shipwrecked Wakes up on the the Island Lilliput

Gulliver’s Travels - . by jonathan swift. summary. in each of the three stories in this book, adapted from

GULLIVER’S TRAVELS - . part one the voyage to lilliput. question #1. what do you think is gulliver's probable frame of

Gullible's Travels - . how gullible are you?. do you believe. everything you read?. books?. the newspaper?. the

Gulliver’s Travels - . study guide. question #91. they were quarreling about how you should crack an egg. whether you

Music Travels - . trends in italy, germany, france, and england. some organists: frescobaldi, sweelinck, and others.

Gulliver’s Travels - . objective: to recognize an author’s style by highlighting rhetorical similarities between