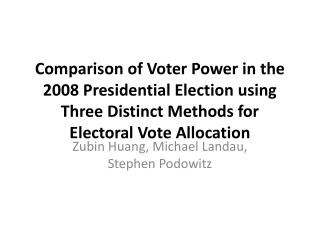 Chapter 40 - . the resurgence of conservatism. president ronald reagan. older than any man previously elected to the

Bell Ringer - 1. what is the event called in which the delegates vote to pick their party’s presidential and

The Electoral System - . federal and provincial governments hold elections at least every 5 years . the prime minister

The Electoral College - . true or false?. the candidate with the most votes is elected president. answer: not

Voter Registration: How To, FAQs, and Tips - . how to register someone to vote. who can register to vote?. you must be: a

The Presidential Election of 2000 - . introduction to the election. election night. 7:50 pm est (10 minutes before polls