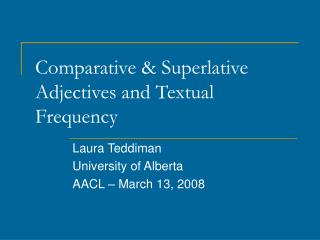 The Comparative Method - . lecture 2. why and how to compare countries; description – classification –

Going On the Air - . pages 79 – 87 by joe seibert. going on the air . choosing an operating frequency you should

BEYOND THE UNITED STATES: THE COMPARATIVE PERSPECTIVE - . chapter 16. the comparative perspective. phenomenon of