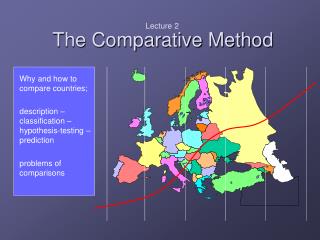 The Comparative Method. Lecture 2. Why and how to compare countries; description – classification – hypothesis-testing – prediction problems of comparisons. Objectives. to know and understand the basics of the comparative method; its applications; its scope and limitations. The Comparative Method in the Social Sciences - . goals of social science research. identifying general patterns and

Applying the Comparative Method in Afroasiatic (Afrasian) - . christopher ehret. over the past decade and a half, the

How to control for phylogenetic non-independence in comparative analyses: an update on the comparative method - . tom

The Comparative Essay - . the persuasive essay. convince me while it is like an expository essay in its presentation of

The Comparative Essay - . the comparative essay. focuses on developments in at least two societies or regions. relates to

“The Method” - . an introduction to stanislavski. what is good acting?. every age/culture has an idea of what

The Method - . step 1. relaxation. relaxation is the foundation upon which rests the &quot;house of

A Method for a Comparative Evaluation of Semantic Browsing - . sami lini – research intern at the deri, galway – july

T he Subnational Comparative Method in Media Studies: The Case of Mexico - . “media and governance in latin america ”