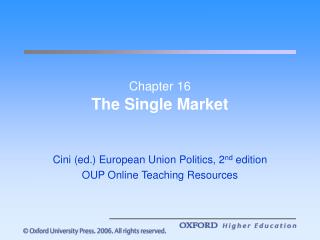 Chapter 16 Single-Population Hypothesis Tests - . hypothesis tests. a statistical hypothesis is an assumption about a

THE DIGITAL SINGLE MARKET - . what’s it all about? what’s it got to do with psi reuse?. outlines and aims. where psi

Single Market - . topics. what is the meaning? how/why did it happen when it did? describe the main initiatives of sea

The Caribbean Single Market Economy - . understanding the impact of the free movement of labor on the people of st.

The Caribbean Single Market Economy - . understanding the impact of the free movement of labor on the people of st. lucia

Chapter 16, The Family  - . the nature of families perspectives on the family dynamics of mate selection and