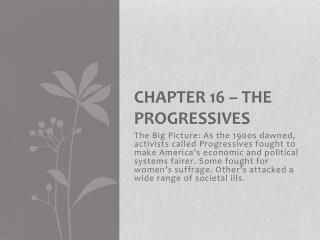 Chapter 16 - . summary. sinusoidal response of series rl circuits. when both resistance and inductance are in a series

Chapter 16 - . problem solving and decision making. objectives. after reading the chapter and reviewing the materials

Chapter 16 - . monetary policy and a look at the role of labor. the federal reserve system. the central bank is a

Chapter 16 - . reconstruction and the new south america , history of our nation textbook pages 542-561. powerpoint by mr.

Chapter 16: Uncovering Problems at the Turn of the Century - What social, political and environmental problems did