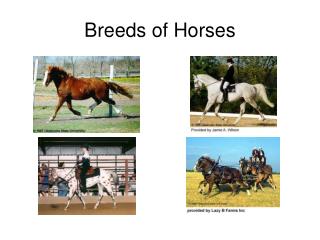 Horse Breeds and Uses - . howdy ya'll. what do you know about horse types/breeds and our uses?. light breeds. light

Equine Breeds - . equine science &amp; technology. equine breeds. feral - a horse that was once domesticated and has

Crazy Horse - . who was crazy horse ?. crazy horse was a sioux indian .but not just any india ,he was a hero ,a mentor ,a

HORSE BREEDS - . introduction. Ω my topic this year is about horse breeds. Ω i have chosen eight horses. Ω i chose

Horses In WW1 - . use of horses. horses were used as and essential offensive element of the military force during ww1.

Identifying Horse Breeds - . next. explanation. in this lesson, we will be learning about 7 popular horse breeds. you

Horses - . by, abby. horse names. foal - a baby horse less than a year old. yearling - a young horse between the ages of

Horses! - . what are things you should know about horses?. you shouldn’t approach a horse directly in front of its face

All About Horses Mrs. Gilbreath - . the horse (equus caballus) is a large odd-toed ungulate mammal, one of ten modern

Horse Power! - The purpose of this activity is to teach you some basic horse knowledge that you can use throughout your

Use of Horses - . two hundred thousand horses were working on farms in scotland; but by the 1950s this total had dropped