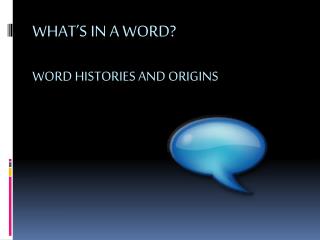 What’s in a Word? Word Histories and Origins What’s in a Word? Word Histories and Origins. Word Stories. Every word has a biography, like a person. A word’s biography includes where it was born, how it grew and changed, and the influences that made it what it is today. Etymology. the study of words; the biography of a word

What’s in a Word? Word Histories and Origins

Word for the Dazed - . please copy the following s.a.t. word into your english notebook under “word for the dazed”.

WORD-BUILDING IN ENGLISH - . word-formation. process of creating new words from resources of a particular language

Unit 7 The Fun They Had - . overview. word study a global picture a detailed study of text i practices &amp;

What does the word Promoter mean? - . it is the place at which rna pol ii binds. but the word is incorrectly used to

2 Syllable Word Work group 2 - . chunk the word- by reading each word part, then put the parts together. bigg er. bigg

Dr. Bill Vicars Lifeprint.com - . linguistics. let’s play a little word game eh?. i’ll give you the definition of a

Microsoft Word I - . bob herring may 2010. microsoft word i. the program. word is a word processing tool used to create

Etymology - . documenting a word’s history. why include etymology?. many users are curious about history and where

Origin of the word “Nigger” - . the degradation and recovery of the sacred african image. the metu neter. most