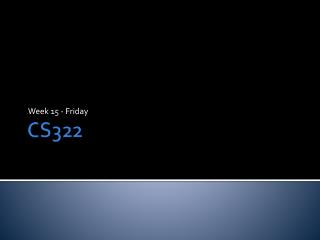 Week 15 - Friday. CS322. Last time. What did we talk about last time? Review second third of the course. Questions?. Logical warmup. A mother is 21 years older than her child In exactly 6 years, the mother will be exactly 5 times as old as the child Where's the father right now?. CS322 - Week 3 - wednesday. cs322. last time. what did we talk about last time? basic number theory definitions even and