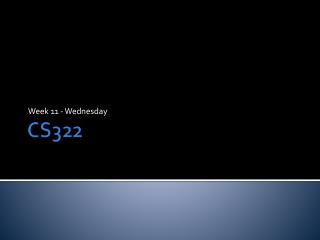 Week 11 - Wednesday. CS322. Last time. What did we talk about last time? Graphs Euler paths and tours. Questions?. Logical warmup. One hundred ants are walking along a meter long stick Each ant is traveling either to the left or the right with a constant speed of 1 meter per minute