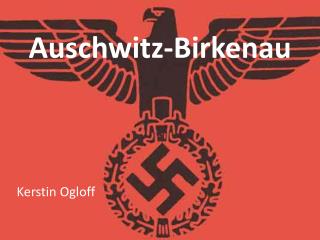 Auschwitz- Birkenau. Kerstin Ogloff. Location Of “ Concentration Camp”. Auschwitz- Birkenau was located in South Poland right next to the city of Krakow. Who was sent to Auschiwitz-Birkenau. Jews, Gypsies (Roma), homosexuals, asocials, criminals, and prisoners of war Auschwitz/ Birkenau - . auschwitz was one of the biggest death to ever be build by the germans. this camp was built in

Auschwitz- birkenau - . by jacob. location . auschwitz is located in the southern part of poland near the city of krakow.

Auschwitz / Birkenau ! - . location!. the location of auschwitz/ birkenau was oswiecim, poland. this was the main

Auschwitz- birkenau Location - . auschwitz is located in the southern part of poland, in lesser poland province. the

Birkenau to Auschwitz to Buna - . concentration