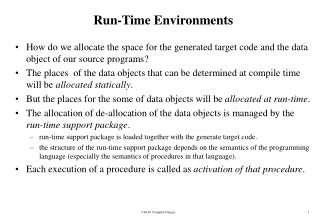 Run-Time Environments. How do we allocate the space for the generated target code and the data object of our source programs? The places of the data objects that can be determined at compile time will be allocated statically .

What is FeathersJS? - Many web developers nowadays take advantage of cross-platform runtime environments like nodejs to

What Is Java - - java, was developed by sun microsystems, by james gosling, is an object oriented programming

Chapter 7: Runtime Environments - . each execution of a procedure is referred to as an activation of the procedure . if

Marine Environments - . what are the major life zones in the ocean and along the coast?. objectives. students will be